After seven long years Apple and arch rival Samsung settled their legal wranglings, lawsuits and counter suits. Yes the gloves are off and its hand shakes all round.

Apple first sued Samsung in 2011 for copying the design of the iPhone, kicking off a winding trail of countersuit, trials and appeals, including a stop at the Supreme Court in 2016.

Apple initially sought to block Samsung phones from the US market, but the technology at dispute has long been outdated, and the fight has since largely been about money. Apple at one point sought more than $2 billion, while Samsung had argued it owed just $28 million.

With two of global industry’s biggest players fighting over one of history’s most successful products, the case was one of the most closely watched legal fights in modern business.

“And if I had to characterize it, it didn’t really accomplish anything,” said Brian J. Love, a Santa Clara University law professor who tracked the case. “Close to a decade of litigation, hundreds of millions of dollars spent on lawyers, and at the end of the day, no products went off the market.” 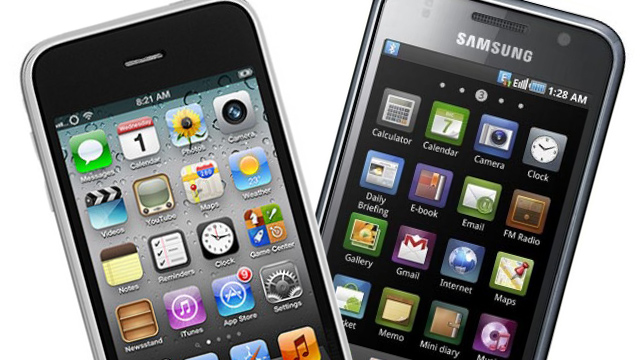 Apple won on paper, but it failed in its goal to gain a competitive advantage over Samsung and other phone makers in its series of lawsuits against them, said Mr. Love and Michael A. Carrier, a professor at Rutgers Law School who studies patent law.

After years of legal fees and countless hours of its executives’ time, Apple walked away with negligible profits on the cases, particularly in the context of its $267 billion cash pile. Apple still earns most of the smart phone industry’s profits, but Samsung and other handset makers have kept up the pressure with strong market share and innovative products.

“Apple can find better ways of earning hundreds of millions of dollars than fighting a decade-long lawsuit,” Mr. Love said.

For other companies, the case is likely to serve as a lesson that “the courtroom is not always the place to try to get ahead,” Mr. Carrier said. “There’s always the trade-off between litigation and innovation, and in the time these companies spent in the courtroom, they weren’t innovating.”

He said the case set the legal precedent that even if a company is shown to infringe on some patents, the courts might not block the product if the patents at issue play a small role in the device.

An Apple spokesman, Josh Rosenstock, referred to a previous company statement that said the “case has always been about more than money.”

“Apple ignited the smartphone revolution with iPhone and it is a fact that Samsung blatantly copied our design,” Apple said in the statement. “It is important that we continue to protect the hard work and innovation of so many people at Apple.”

The companies did not disclose the settlement amount. A jury in May ordered Samsung to pay Apple $539 million for infringing on its patents.

Its pretty clear to anyone that the Samsung was a direct copy of the iPhone. Apple should have taken on Android, as the OS used by Samsung’s phones. This would have been the legal battle to determine the future of smart phones. But, Apple did win in the end, but the victory is rather hollow and empty. Yes, that added a few million or hundreds of millions of dollars to the Apple bank balance, most lightly just slightly more than the legal bills. Samsung still churns out smart clones at a huge rate.

Apple won’t really have won until they can cancel all of their Samsung supply orders after working with suitable replacements for D RAM, screens and other critical components of iPhones and iPads. Until then Apple needs Samsung as a supplier.