The Apple timor mill is a buzz with claims of a Smart Speaker with Siri to emerge next week.

Apple is rumored to be working on an Amazon Echo competitor, offering a speaker with Siri integration that’ll be able to serve as a home hub for controlling smart products, playing music, and more.

Apple Is Manufacturing a Siri Speaker to Outdo Google and Amazon

The common theme seems to be that Apple will launch or announce rather than ship a Siri powered home speaker hub at next week’s WWDC.

Rumours suggest the Siri-enabled speaker will be able to respond to voice commands and play music (via Beats technology), set alarms, control smart devices and search for information online, and may even run a modified version of iOS.

What will Apple’s Siri speaker be called?

Based on previous products and Apple’s acquisition of Beats, the audio company, there’s a wide variety of names that could be used. Here are our favourites:

Some names such as iHome and iSpeaker already exist in the form of other company’s hardware products; Apple Home, too, is already taken by Apple’s smart-home app (which controls appliances that are rated as HomeKit-compatible). It’s possible Apple could buy or swap the branding if it thinks one of these names is more suited to this new product, but we think Siri Speaker currently looks most plausible.

When will Apple’s Siri speaker be released?

Given Apple’s WWDC 2016 conference, when the company opened Siri up to third-party developers, we could see the use of Siri SDK in an upcoming speaker. The timing and release date of previous hardware also make it plausible that Apple will announce the speaker at WWDC 2017 in June, with the product itself released later in the year – possibly in September 2017.

That timing was echoed by a May 31 Bloomberg report from Mark Gurman and Alex Webb, which claimed that Apple had started manufacturing the speaker and that it “could debut the speaker as soon as its annual developer conference,” but that it wouldn’t be ready to ship until later in the year.

Things might not be as advanced as that, however. Many pundits believe that Patent 9,651,999, ‘Electronic device with radially deployed components’, refers to the cylindrical design of the Siri Speaker, but there is usually a lengthy gap between the filing of patents and the launch of the products they refer to. This patent was filed in May 2015 and granted in May 2017. 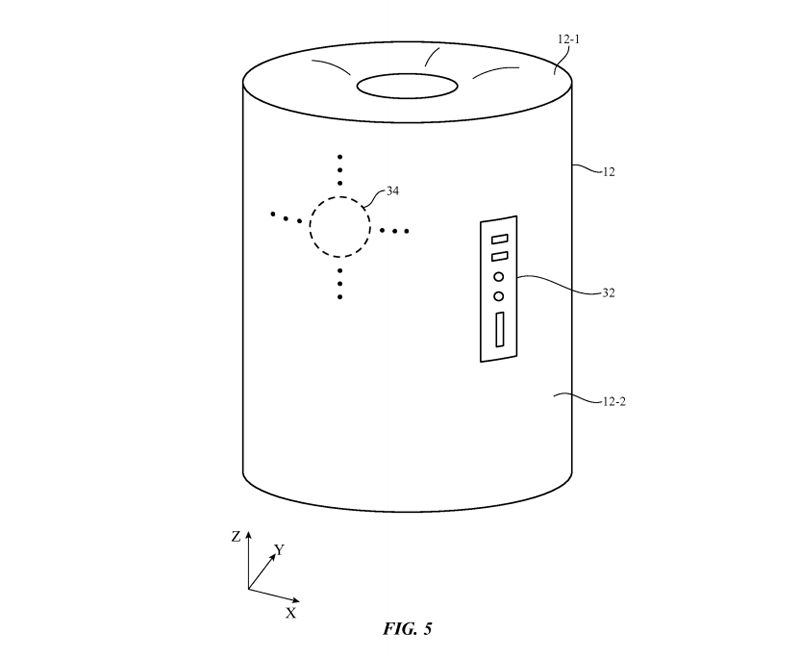 Some reports have disputed that Apple plans to launch a smart speaker device at all. Writing in Time, Tim Bajarin said: “After talking with Apple executives, I’ve come away with the impression that they’re more interested in turning Siri into an omnipresent AI assistant across devices, rather than designing a single device specifically to serve as a Siri machine.”

He argued that Apple was more interested in expanding Siri support across multiple devices, citing the AirPods as an example, and in using Siri as a virtual control hub for an array of different smart home devices.

How much will the Siri speaker cost?

What should we expect from the Siri speaker?

While there are rumours regarding a possible reveal date for Apple’s Siri speaker, there isn’t much about what it’ll look like or what it’ll feature. Why? According to infamous Apple leaker Sonny Dickson, Apple is only now finalising the designs for its speaker. Dickson also claimed that the speaker may feature some kind of Beats technology following Apple’s acquisition of the company in in 2014. He claims that the speaker could also run a modified version of iOS and may even feature a touchscreen, a feature notably missing from Google Home and the original Amazon Echo.

Amazon recently addressed that though, introducing the Echo Show, a standalone touchscreen station for video calling and handsfree search. This was announced shortly after the Echo Look, a personal style assistant with built in camera. Apple could incorporate either idea into its own product, though a focus on fashion seems highly unlikely.

Mark Gurman’s Bloomberg report offers more speculation on the potential speaker’s features. He claims that there will be no touchscreen on the device, and that its key differentiation will be in sound quality: it will boast virtual surround sound technology, will be louder and crisper than rivals, and could potentially even include sensors that “measure a room’s acoustics and automatically adjust audio levels during use.”

He also claimed the device will offer deep integration into Apple’s existing services, and will act as a hub for all of the existing HomeKit appliances. It’s expected that Apple will also include some third-party integrations though, much as how Siri can already be used to order an Uber or send a WhatsApp message.

The app support will really depend on individual developers and Apple’s stance on opening up the speaker, but the possibilities at this stage are endless.

We’d also be surprised if Apple didn’t make a few additions to its range of funny things to ask Siri, to make the most of the new ways people would now be able to use it.

We will update this article as soon as we know more information on Apple Home. Let’s just hope the Siri speaker proves a bigger success than Apple’s first foray into the speaker market: the ill-fated (and long-forgotten) iPod Hi-Fi.

As WWDC is less than a week away we will all know how accurate these rumours are in a handful of days.